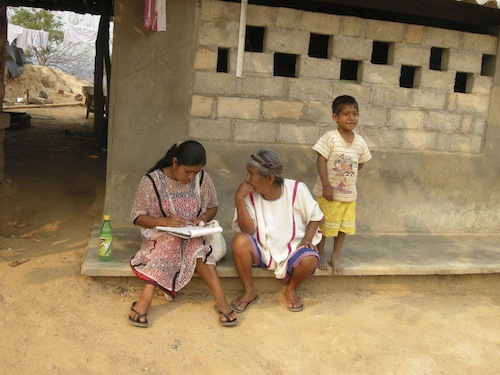 During a baseline survey in 2008, we collected information related to recent birth experiences and birth culture in Xochis.

After obtaining ethics approval in both Mexico and Canada, we designed the survey through participatory workshops with indigenous health promoters, researchers and social scientists. We trained indigenous fieldworkers to conduct household interviews and enter data.

In May 2008 we visited 2616 households in 17 communities in Xochis and 14 in Tlacos. We conducted extensive interviews with:

The results from the baseline survey revealed that 6 out of 10 women sought traditional midwives for advice and care while pregnant. Among women from remote communities, prenatal care provided by midwives was preferred to care from physicians. Positioning the baby in the mother’s womb was the service most frequently requested of midwives, even from those who delivered with doctors. On the other hand, there was a decline in traditional midwife-assisted home births over the last decade. Out of every 10 births, 4 were attended by a midwife, 4 by a physician, one by a family member and one woman gave birth alone.

It was clear that indigenous women were being coerced away from traditional practices and providers into using hospitals and clinics, in a culturally insensitive environment (in 70% of hospital deliveries there was no one to translate interactions with government health staff and in 40% of cases women were not allowed to choose traditional positions for delivery).

And yet, obstetric results were not what advocates of clinics and hospitals might have expected. Birth complications such as perineal tears were less frequent in traditional midwife-assisted births (12%) compared to births assisted by doctors (15%), with lower infections of wounds (14% compared to 19% with doctors). Moreover, indigenous midwives were a critical and undervalued link between traditional and biomedical care: women were seven times more likely to have gone for prenatal control in government health units if a traditional midwife had told them to do so. Most women and their families accepted midwife advice to deliver in a health care unit, while half of all midwives had personally taken their patients to the hospital.

Based on this evidence, and together with traditional midwives and indigenous community health promoters, we designed interventions seeking to strengthen traditional midwifery, while improving the quality of government prenatal services, maternal health surveillance, and transportation in obstetric emergencies.